One of my favorite stories in the Jewish canon occurred in this past week's Torah portion. "And Isaac went out walking in the field toward evening and, looking up, he saw camels approaching. Raising her eyes, Rebekah saw Isaac. She alighted from the camel..." In itself it's not so exciting, until you realize that "alighted" is a polite word in English for what actually transpired in the Hebrew: she saw Isaac and promptly fell off the camel. Now, however, an article in the N
12 views0 comments

There a ton of music and film festivals happening right now in Israel - as well as new Jewish documentaries available online as well. Here is a list of some of the highlights for you from your Israel tour guide! The Oud Festival - November 19-28 The oud is Middle Eastern string instrument and Jerusalem has held an international festival celebrating it for two decades. Due to COVID-19 it will not be happening in person. While this means that only local performers will be hig
126 views0 comments

There are so many great webinars on Israel and Jewish-related things this week. Here are some highlights, from your trusty tour guide of Israel. Plus, check out the videos below of the Dead Sea Scrolls lectures from earlier this month. Have You Ever Heard of Sigd? Monday, Nov. 16 at 8pm in Israel (1pm EST) Sigd is a Jewish holiday marked by the Ethiopian-Jewish community 50 days after Yom Kippur. It celebrates their finally making it back to Jerusalem - through all the tr
25 views0 comments

Rabbi Lord Jonathan Sacks, whom I consider to be the greatest rabbi, teacher, ethicist and philosopher of our generation, passed away on Shabbat. His deep knowledge of secular subjects, literature, history and philosophy from ancient to modern was unique among Jewish thinkers and as such, he was able to relate to a non-Jewish audience as well as a Jewish one. An ambassador for faith and morality, tolerance and repairing the world, his books have been and his videos have bee
47 views0 comments

The trailer for an Israeli English-language film - a loose modern reenactment of the story of Jacob and Esau - has just been released. The film stars Harvey Keitel as Abraham, Shira Haas (from Unorthodox and Shtisel) as Leah and Lior Ashkenazi in the title role of Esau. Ashkenazi is the winner of 3 Ofirs (the Israeli Academy Awards) for best actor. It also features as Sarah, Gila Almagor who won a lifetime achievement award at the Ofirs - and then won two best actress awa
17 views0 comments

Over the past month, a number of incredible archaeological discoveries have been found in Israel. Unknown gates on the Temple Mount, a Byzantine church near Caesarea Phillippi, ancient boundary stones and weights, a signet ring with the seal of Apollo, perhaps the world's first furnace and more. As your resident tour guide of Israel, it is my pleasure to recap all of them for you here... It's amazing that this had never been noticed before: Two blocked-up arches which were s
7 views0 comments

Jerusalem's famed Tower of David Museum - which somehow has nothing at all to do with King David - is undergoing a huge renovation at this time, including putting in an elevator to allow everyone to get to the top and experience the most incredible view of the Old City of Jerusalem. The museum is situated just inside Jaffa Gate and is located in what served as the fortress of the city for 2000 years. The museum includes both the archaeology and history of the fortress, palac
16 views0 comments

An amazing opportunity has become available to the general public. The Israeli Antiquities Authority along with the New York University have put together a free 4-day online conference called "The Land That I Will Show You: Recent Archaeological & Historical Studies of Ancient Israel." It will cover all the incredible recent finds from Israel. It's the perfect opportunity for people who "dig Israel." As a tour guide of Israel, I am incredibly excited to attend this program
16 views0 comments

This week's Torah portion is Parshat Noach, when we tell the story of Noah, the ark and the flood. According to the story, God promises never to destroy the world again by means of a flood and gives us the rainbow as a reminder of that promise. As such, some Jews today are taking the opportunity to make rainbow challah for their Shabbat tables. As your trusty tour guide of Israel, I have collected some recipes, photos and videos for you, should you like to try it home. Sh
36 views0 comments

Israel has emerged now from a second lockdown, which was enacted over the Jewish holidays. While indoor spaces such as museums are still closed, the national parks are now open and more and more places will be opening in the coming weeks. As a tour guide of Israel, I cannot be more excited to get back to work providing incredibly meaningful, memorable and enjoyable experiences here for my clients. At this point, Israel has identified 34 green countries. These are countrie
223 views0 comments

It's about time. This is something we have not seen until now here in Israel - the country with more museums per capita than any other country in the world. We have numerous museums about one topic, one site, one time or place or one group or people or even individuals. There are a select few museums which have attempted to tell the Jewish story throughout the ages, notably the Museum of the Jewish People (the former Diaspora Museum) and the Israel Museum. And yet they ar
10 views0 comments

Now that the Jewish holidays have finished, a number of Jewish educational institutions have started their adult education classes and courses and due to COVID-19, it is all online. If you ever wanted to learn Jewish history, philosophy, religion, etc., you now have an incredible opportunity in front of you with dozens of topics from which to choose. Before I was your Israel tour guide, I actually studied at Pardes and hope to be taking some classes that are listed here as w
2 views0 comments

Shabbat is about to come in here in Israel. To help you welcome it, I have a video here of an IDF soldier on the army base just above Rosh HaNikra on Israel's northwest most point. Just behind the base, by the armistice line with Lebanon (the "Blue Line") is the UN base where this week Israeli and Lebanese negotiators have been talking about their maritime border. The song the soldier is playing is Shalom Aleichem - "Peace onto You" - which we sing on Friday nights to beg
7 views0 comments

An incredibly ambitious (and expensive) series on the Yom Kippur War is about to begin on October 19. It is called "Sha'at HaNeilah" [Closing Hour], which relates to the final prayer service of Yom Kippur. The show has already been picked up by HBO, where it will be called "The Valley of Tears," which was a famous tank battle site on the Golan Heights. If you have visited Israel with me as your Israel tour guide, than you likely have seen this place, a bit northeast of Mo
17 views0 comments

While individual cities across the globe have done so, Israel is set to be the first country in the world to ban the import of fur for fashion. The only problem? It's kind of hot in Israel so one does not often see people walking around in fur. The one exception, of course, are particular Haredi Jewish groups in which the men wear shtreimels, often made out of sable fur. And apparently those - by far the biggest offending group - will be getting a religious exemption. Bu
11 views0 comments

Over the course of two days at the end of September 1941, in a ravine known as Babyn Yar (Babi Yar) below the Ukranian city of Kyiv (Kiev), Germans and Ukranians shot and killed 33,771 Jews, mostly women, children and elderly. Over the course of the next two years, 70,000 more people (Jews and non-Jews alike) were murdered there. The Nazis, later trying to hide their crimes, exhumed and burned the bodies. Later, in the name of "national unity," the Soviets filled in the ravi
60 views0 comments 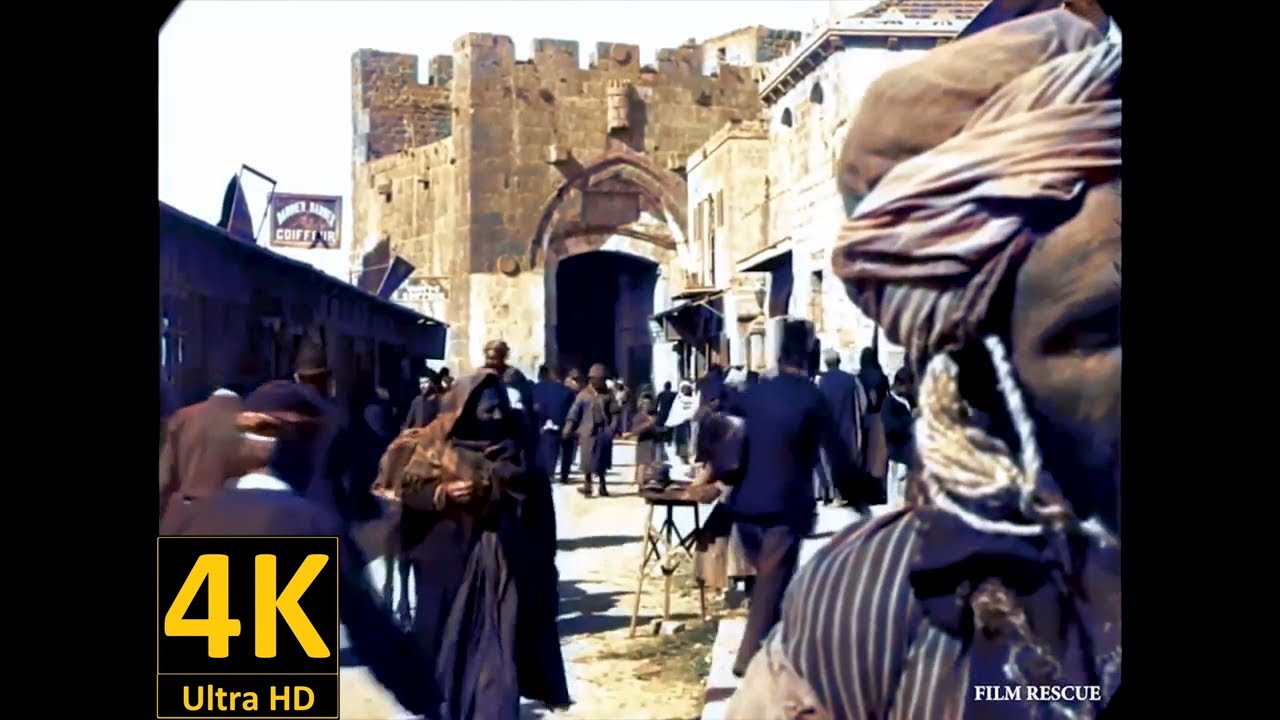 Well here is a blast from the past. A 1-minute video from 1897 at Jerusalem's Jaffa Gate was just colorized and digitized. My favorite are the people who stop to look at this camera contraption like it is a UFO. The film was brought to life by the "Film Rescue" YouTube channel. The footage was taken in April 1897, just months before the small section of the wall [not visible] between the Jaffa Gate and the [mistakenly-named] Tower of David was taken down for the visit of K
37 views0 comments

So many incredible archaeological discoveries were announced in the past month here in Israel. As a tour guide of Israel I cannot wait to see some of these in person - and for you to join me on this adventure! A New Dating Process A new way of dating - in addition to known ones like carbon-dating and using pottery and coins - has been developed by Israeli archaeologists. It might be yucky, but it gets the job done. Basically it uses human and animal waste found in mud-bri
13 views0 comments

Israel set a record last year with 4.55 million tourists. That was an 11% increase over 2018 which itself was a 42% increase over 2016. Even more amazing is that 94.4% of visitors to Israel reported a good to excellent experience in the country. That's an incredible success rate and I take pride in that, as a tour guide of Israel, I have a small part to play in that. If you are unaware, becoming an Israel tour guide is like getting a master's degree. It is a 2-year course
5 views0 comments
1
23